Henderson vs. Masvidal, The Grudge Match

The American Conhole League (ACL) adds The Grudge Match, Jorge Masvidal vs Cody Henderson, to the Pit Boss Man and Woman of the Year Shootouts on ESPN2!

In January 2020, superstars Cody Henderson (ACL Pro) and Jorge Masvidal (MMA Fighter) met on the Cornhole boards for the very first time on Radio Row in Miami, FL. The two enjoyed some friendly banter as Henderson showcased his skills to win round after round against Masvidal. Cody gave Jorge some tips on how to improve his technique along with some basic strategy for competitive cornhole. Jorge vowed to get better and be back to compete again.

That day to compete again is Wednesday, August 5th, at 8:00 PM EST on ESPN2 as a special event within the Pit Boss Man and Woman of the Year Shootouts. This 5 Round Grudge Match will begin with Masvidal being spotted 15 points and if a player reaches 21 points by the end of the 5th Round, that will be considered a knockout. If no player achieves a KO by the end of 5th Round we will go to the scoreboard to determine the winner by decision. Jorge Masvidal says, “I have the fastest KO in MMA fighting history and now I am going for the fastest KO in Cornhole history. Cody will regret spotting me 15 points.” Cody Henderson states, “I respect Jorge’s skills in the Octagon and no doubt he would win every battle there. However, he is entering my arena, I plan to knock him out within the 5 rounds.”

Stacey Moore, ACL Commissioner, developed this match with Masvidal’s business partner as they discussed having him come speak to the ACL Pros at the ACL World Championships. Moore says, “Abe let us know that Jorge really wanted an opportunity to compete under the lights on the big stage. After thinking through several different options, creating a Grudge Match with Cody Henderson made the most sense.” The format is a shortened version of ACL’s round limit shootouts that surround this event and integrates MMA themes. Moore continues, “This format is exciting and makes every bag matter. I think if Jorge can translate the defensive skills he recently showed in his Championship bout to his strategy on the cornhole boards, then he has a good shot to win. If Cody is on the top of his game, he will make up the points gap to get a late KO or win by decision.”

For entertainment purposes only, Trey Ryder shares his prop odds: 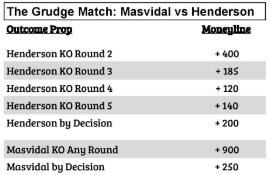 About the Pit Boss Man and Woman of the Year Shootouts

The ACL Man of the Year and ACL Woman of the Year Shootouts are single elimination, 10 round limit events. The top males and top females have qualified throughout the season to participate in this winner take all event. It is one of the featured events at the ACL World Championships