Over 70,000 people filled Mercedes-Benz stadium in Atlanta, Georgia to bear witness to one of the best college football games of the season. Football powerhouses Alabama and Georgia went toe-to-toe with infinite bragging rights and, of course, a college football playoff berth on the line. The epic championship featured Alabama backup-turned-reliever quarterback Jalen Hurts propelling the Crimson tide to a victory, overcoming a 14 point second half deficit in the process. 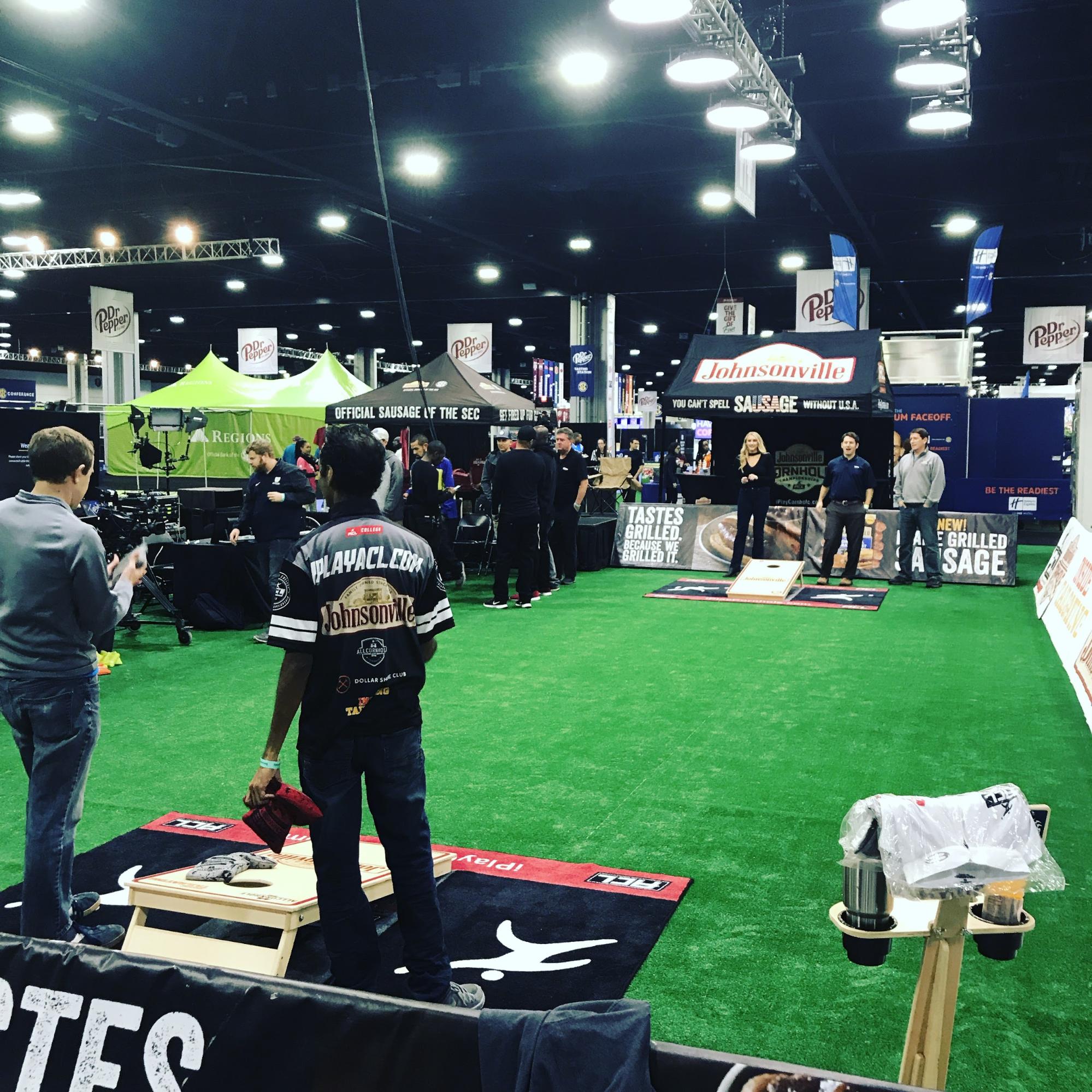 The setting of the SCCC was one for the ages

Amidst this incredible comeback, all 70,000 in attendance got to meet some special individuals at the end of the 3rd quarter. Sporting their brand new jerseys, the finalists of the Southern College Cornhole Championship proudly hoisted their $20,000 scholarship check on the field amidst a sea of red and crimson. The atmosphere was electric, and the players were proud of the feat they accomplished just a few hours earlier, in an oddly similar fashion.

The 2018 SCCC invited seven teams from each of the SEC division winning schools in football. Fourteen students from the University of Georgia and the University of Alabama qualified to represent their school with a chance to win $20,000 in scholarship money over two days. Although the students came from just two schools, they represented such a diverse background of individuals. The University of Alabama featured unique students like Michael Tiernan, head of morale of his fraternity who proudly boasts of his “make it happen Monday” philosophy and brothers Jake and Henry Bugajski who competed in this same event a year ago. The University of Georgia included an aspiring country music singer Brad Evans and a former UGA football tight end Evan Arnold.

Day one of the SCCC featured warm up match play on a live ESPN3 broadcast. Thankfully for the University of Alabama, day one had no scholarships on the line. Led by future hopeful ACL Pro Joseph Hart, the University of Georgia dominated match play. Hart proved to be a dominant force in day one, with the highest in-the-hole average of all participants. Other Georgia players like Will Bond and Pat Maguire brought not only consistent slide shot play, but excitement and energy which fueled UGA to a win. A 6-1 victory over the Crimson Tide had the Bulldogs confident and fired up for day two. 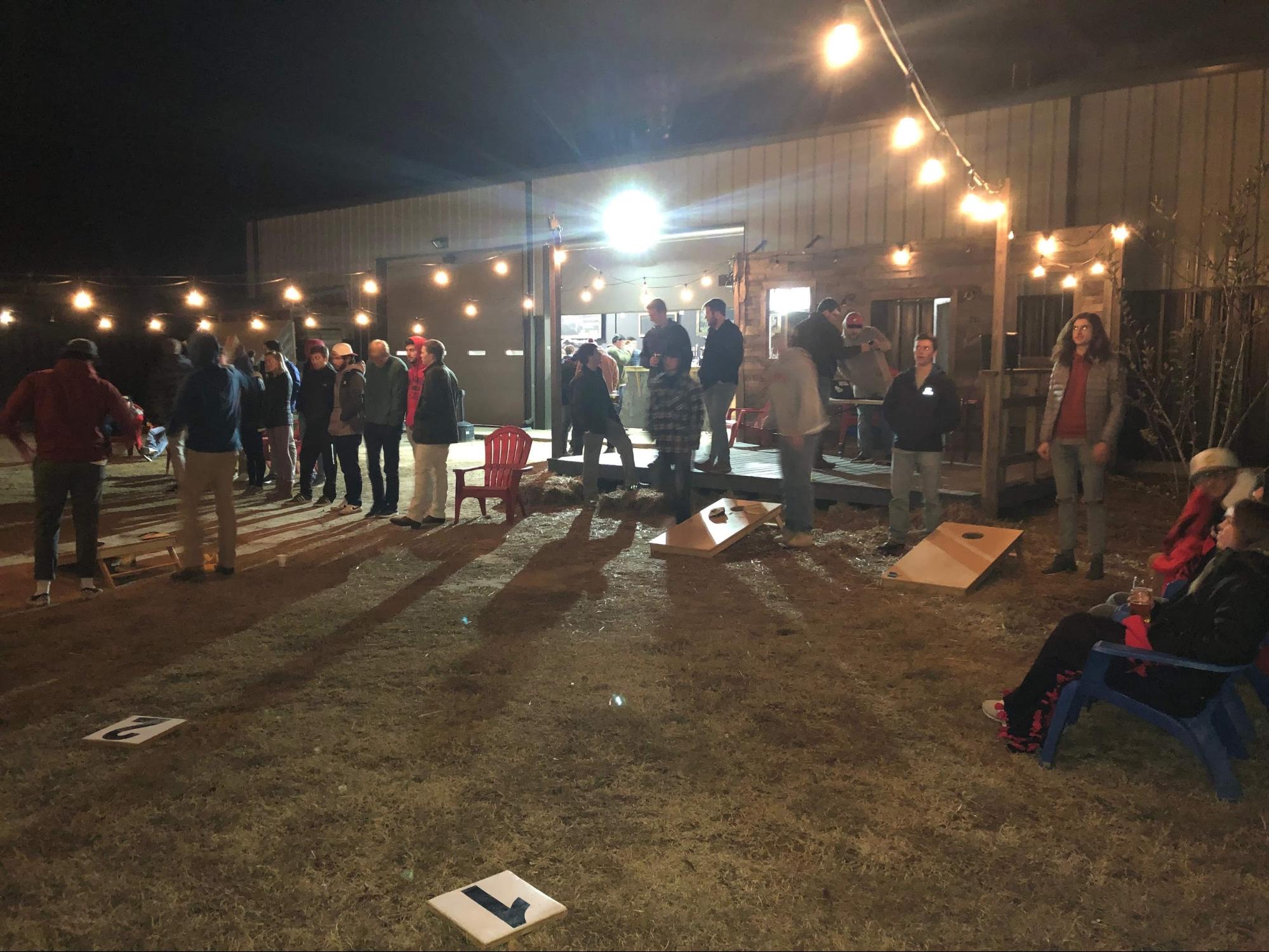 Day two was the real competition, all live on ESPNU. Seven matches with a total value of $10,000 in scholarships on the line, not to mention a game seven win would lead to a matchup against ACL Pros Eric Ryder and Dusty Thompson for an opportunity to double the scholarship money for the entire team. Games 1-3, however, turned out just like day one. Three straight victories put the Georgia Bulldogs in a commanding lead for the day, with hopes of completing the clean sweep that they had come up just one game short of the night before. A four point mistake late in game two by Alabama’s Jack O’Malley, and a big game by Georgia’s Hughes Reese to limit the scoring by Alabama’s day one top scorer Michael Tiernan had the SEC Fanfare crowd believing they were having deja vu.

But then, just like Jalen Hurts marching down the field in the third quarter for Alabama, the Alabama Cornhole team put on their rally caps. Three straight victories for the Crimson Tide followed the 3-0 deficit, a comeback that’s been only reserved for teams like the 2004 Boston Red Sox. Led by #2 seeds Logan Dauphin and Michael Orso, the Alabama Crimson Tide began to roll. As the stakes grew, so did the intensity from not only the players, but from the crowd. Dauphin had arguably the best game out of any individual over the two days, and it could not have come at a better time. 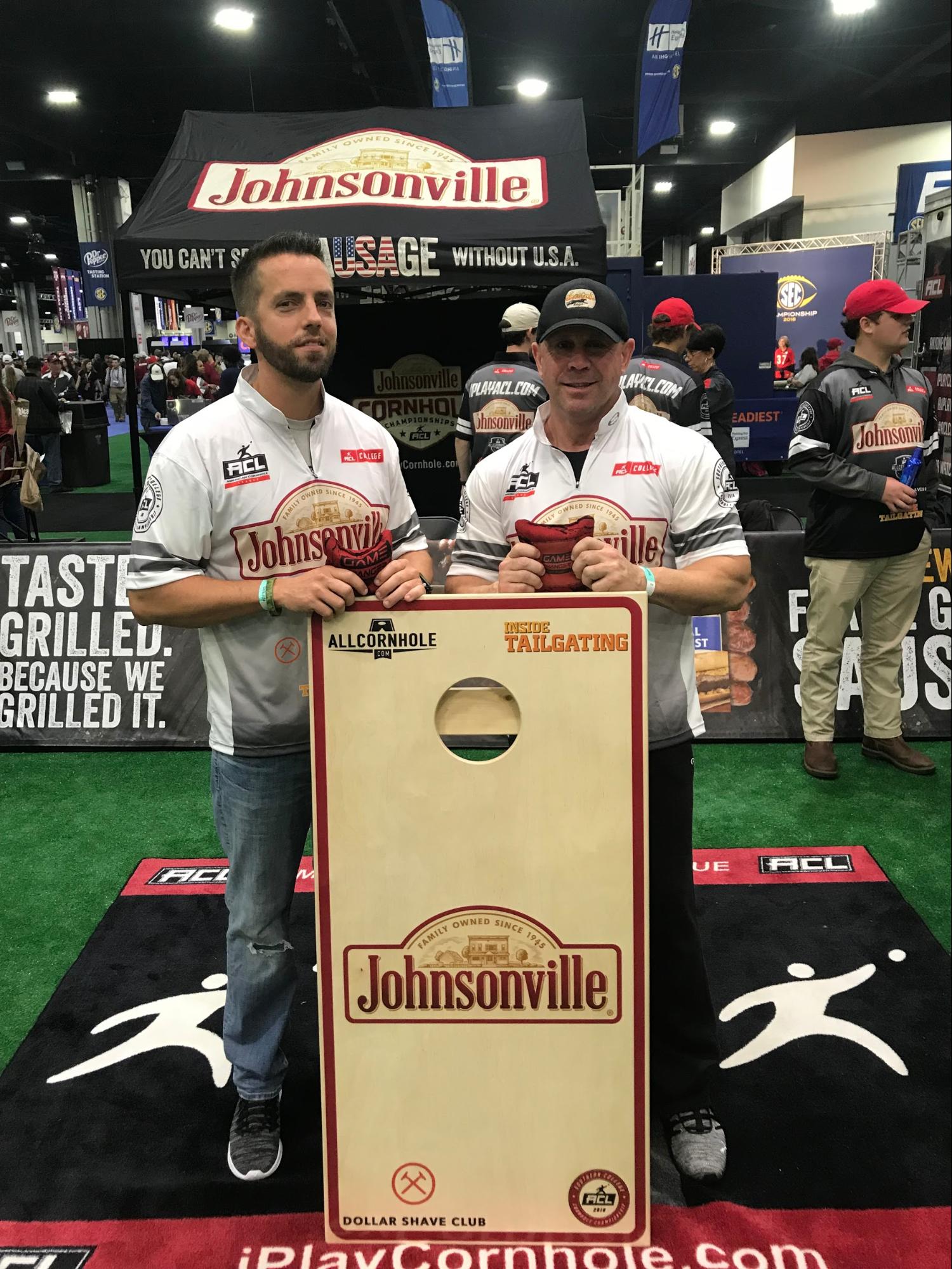 Just like the SEC Championship, we sat tied, late in the game, with one opportunity left. For the Alabama football team, they took advantage and prevented a late Georgia score to tie the game preventing overtime. But unlike the football team, the University of Georgia would not be denied. Brad Evans and Jake Bugajski had an incredible battle at one end of the board. Both players exchanging rounds of minimal points. In the end, it came down to Joseph Hart and his consistency against Henry Bugajski, who struggled on day one but recovered to have a respectable day two performance.

University of Georgia’s Drew Aspinwall gave us two great quotes over the weekend. First he told us that “pressure is a privilege”. For the Bulldogs, it most certainly was. The composure to give up a 3-0 lead and then comeback to win the final game shows that they could handle the privilege set before them. Aspinwall also reminded us that in the words of the great Kirby smart, “just keep chopping”. The University of Georgia top seeds Joseph Hart and Brad Evans went on to face a team of ACL Pros for a chance to “keep chopping”. Although they came up short on the victory, they were valiant in their loss and gave the pros a game. A 21-15 loss is one that they won’t soon forget, and in a good way. 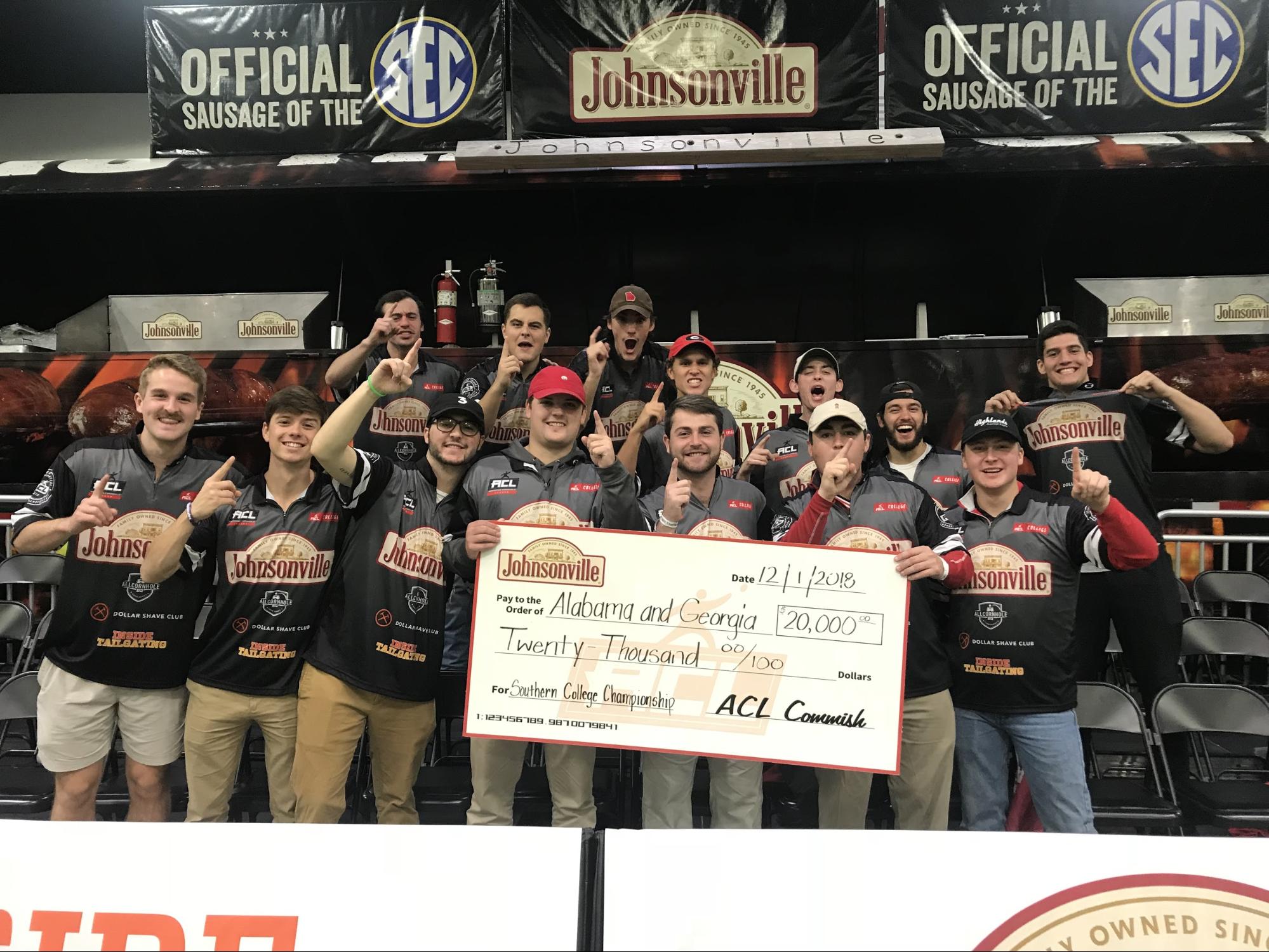 In the end, everyone was a winner. Johnsonville, title sponsor of the SCCC, doubled the scholarship money of all of the players from both schools. The players also got a ticket to the big football game later that day, and we know it was an experience they won’t soon forget. For the Univeristy of Georgia, though, they leave Atlanta as (half) champions. Just keep chopping.