Each sport has its signature highlight play. It's the one that ends up on all the posters and it's the one that the fans pay money to see. Basketball has the dunk, baseball has the home run, football has the touchdown, and cornhole has the airmail. The term itself is unique, but represents the travel of the shot pretty well. There are many forms of the airmail, but all of them involve simply throwing the cornhole bag directly into the hole. Sometimes they drag bags, sometimes they travel with a line-drive type trajectory, and sometimes they win games. The airmail is highly regarded in cornhole as the toughest shot to make. After researching over 30 hours of film, I've found that at the highest level, cornhole players will shoot about 60% on airmails. Specifically, that figure is representative of the ACL Advanced and ACL Pro Divisions. Just like the three-point shot in basketball, shooting significantly higher or lower than the average on the airmail can sway the result of any game immensely. There are not many players in the country who have mastered the shot at the highest level, and even those who have, are never perfect. This list recognizes the players who have seemed to master the airmail shot. There were many honorable mentions for this list as the gap is so small, but hopefully you should recognize some of these names; if you don't, better hope you don't play them next. This list focuses on play over the past two seasons, but will not fail to recognize if the player has a long-standing history of airmail shots.

There certainly may be some recency bias with my #10 selection, but those who have seen Rob Guthary compete, know that he won't hesitate for a second to throw the airmail. When I started this list, I had him off of it, but his recent success at the 2019 ACL Cornhole Mania has earned him a spot on this list. In that tournament, he hit 6 four baggers in his final game and many of them accompanied airmail shots. He has no fear when it comes to airmailing, so if he ever misses, he puts himself into some tough positions. Guthary doesn't throw the flattest bag, so often times he will rely on the airmail to bail him out in certain tournaments in extremely tacky conditions.

Anytime you go to a tournament and you see someone wanting to play "airmail only" cash games, you know they have confidence in that shot. I've seen Pitcher throw airmails blindfolded, under his legs, over his shoulder, and however else he feels like it that day. There are few players in the country that I would describe as fearless, but Pitcher is one of those players. He lives and dies by the aggression of his airmail shot, which usually works out for him. In fact, the only person to ever truly throw him off his game was a former USA Olympic Gold Medalist (sorry Timmy). People make the visual comparisons to James Harden, but the fearless attitude that Pitcher embodies when he plays the game and shoots the airmail directly compares to Harden's basketball game. Similar to Modlin, when Pitcher loses, it's because he must rely on his airmail too much in order to get him out of situations that his errant slide bags have put him.

Good ol' Daymon "Double D" Dennis. Dennis is one of my favorite players to watch just because he looks so sweet and innocent before walking up to the boards to mop the floor with his upcoming opponent. Dennis' slow and methodical approach is what gives him such an advantage over his opponents. You're allowed 20 seconds between throws in the ACL, and I'm pretty certain he has pushed the limit of that shot clock numerous times. The approach he takes is advantageous for repetition of muscle memory, which is exactly what an airmail requires. His natural loft makes airmails just that...natural. He throws almost exclusively on the slick side of the bag, which also allows airmails to more easily fall into the hole in the event of catching the rim of the hole on a shot. Dennis may play the "good ol' boy" part well, but his game is anything but ordinary.

Frank Modlin may just be just a gym teacher from North Carolina, but he's also a perennial powerhouse in the cornhole world. I'm not sure what it is, but Modlin drags more bags via airmail than any other player I've seen. I've personally witnessed him throw 4, 8, 12 airmails in a row on an open board. Unlike many players on this list, Modlin will switch between both sides of the bag on his throws. The introduction of his custom GameChanger bags has only made the task of competing against Modlin that much tougher. On the television broadcast stage, Modlin is shooting over 60% on airmails which is incredible when you factor in the pressure associated with those stakes. He's so good on airmails that the only way you can really hope to beat Frank is by hoping he starts kicking left and right on his slide shot.

Ryan Windsor is one of the best overall players in the country, and is probably on the biggest hot streak at the moment. I really believe him and ACL Pro Cody Henderson are so similar in talent and play style. They have such a wide range of abilities and do such a great job of balancing their shot arsenals. Windsor makes it on the list over Henderson because of the airmail effectiveness. While Henderson probably has some better shots other than the airmail, Windsor has shown time and time again that he can effortlessly sling bag after bag in the hole. One reason that Windsor is so good with the airmail is his bag selection. Windsor has the ability to throw so many different types of bags. He balances the slick and sticky side airmails, allowing him to drag bags when needed. As we saw at the 2019 ACL Cornhole Mania where he dominated the competition, he is also smart with his shot selection, rarely attempting an unwarranted airmail.

Yes, the original "Mailman" has to make my top ten list. I have never seen anyone purposely play games entirely via the airmail shot more than Trellis Cisco. He has the self-proclaimed ugliest bag in cornhole, but it doesn't matter when you can just throw it straight in the hole. Cisco hasn't made much of a stir in the ACL yet this season, but if he does make a comeback you better believe he is going to airmail his way back into form. I witnessed a game of his a few years ago where he made 18 out of 20 airmails...absurd. Cisco also knows the limitations of that play style though, as he has one of my favorite quotes ever about the game of cornhole. He once pulled me to the side and told me "Trey, you want to know the secret to cornhole? You want to know how to guarantee that you'll never lose another game again? Don't play". We all know that's one thing we just won't do.

The signature "BAM" has made a couple appearances so far this year. I mentioned earlier that if you're known for wanting to play airmail-only games that you must be pretty confident in the airmail shot. Well, if you have a signature catchphrase centered around your airmail shot, you must be pretty darn good at it. Dotson's technique is centered around his airmail. His long, smooth, and slow windup was never crafted to be a push bag champion. Dotson has one of the highest arcs in the game and does not throw a completely flat bag. The slight angle on his bag allows the bag to 'get skinny' when trying to fit through an obstructed or blocked hole. Sticky boards would normally destroy a player like Dotson who doesn't throw a flat bag. Instead, he just sets blockers and goes on the air raid attack. He's been one of the most consistent airmailers for years, finishing 3rd place at the 2017 Championships of Bags, but also 5th at the 2019 ACL Kick-Off Battle. 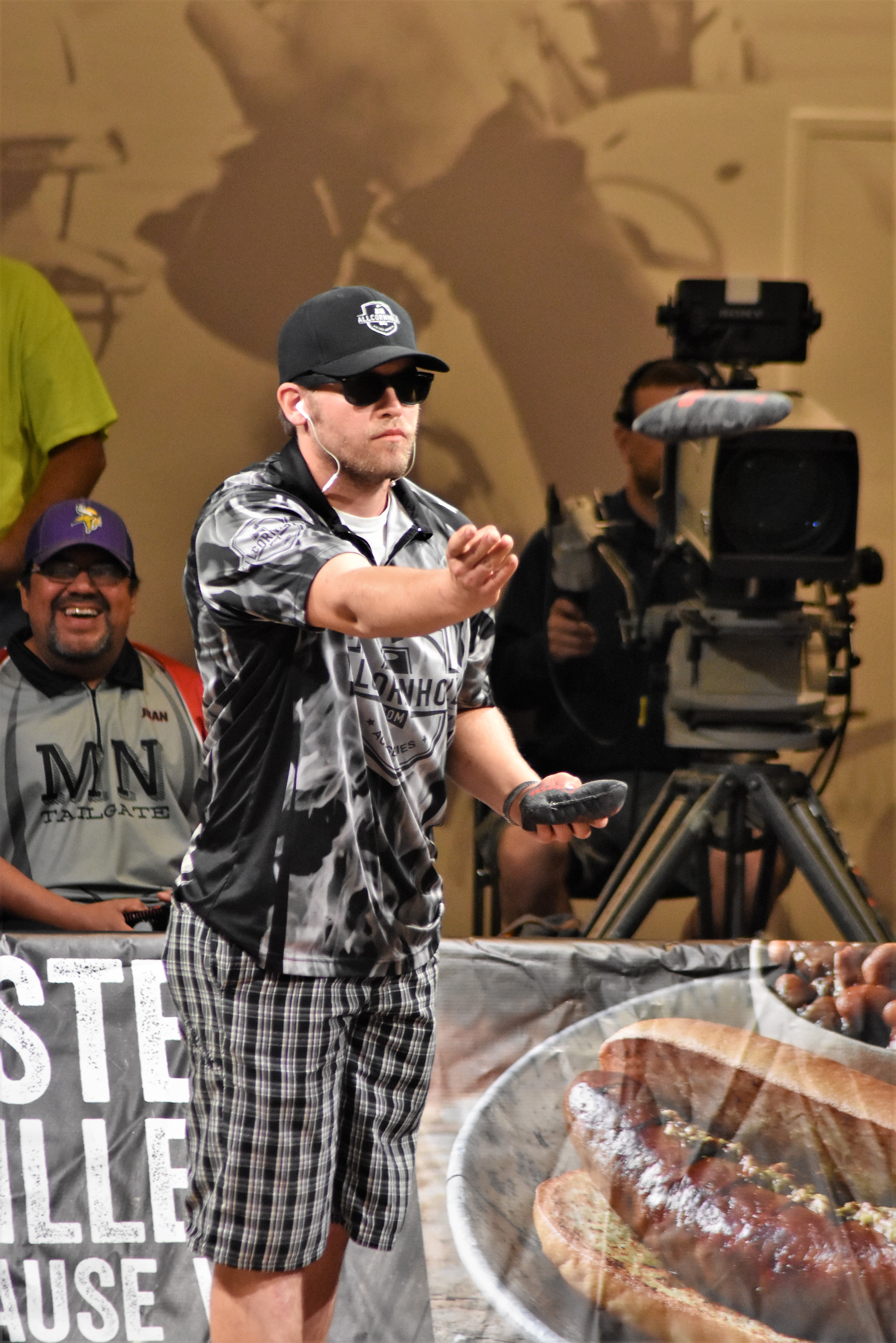 Many will read this article and see Matt Guy not in the #1 spot as outrageous, and maybe it is. If I had to patent a Matt Guy shot, it would be the first bag airmail after the opponent's first bag block. Guy doesn't waste time with short blocks, he doesn't care if you try and prevent his slide shot. Two of the best tournament performances I've ever seen have come from Matt Guy, one at the 2018 ACL Cornhole Mania and another at the 2018 ACL Final Chase where he threw airmail after airmail, regardless of the situation or the circumstances. In my opinion, Guy is one of the most aggressive players in the country, and most of the time it pays off. He won two ACL Nationals last season, he won the 2017 Championships of Bags Doubles,  and countless other regional and conference wins. Not to mention, Guy was two wins away from winning the 2019 ACL Cornhole Mania. ACL Pro Adam Hissner's win against Guy at the 2018 ACL Championships was so memorable partly because of Hissner's play but also partly because of Guy's ~50% on airmails. Why is that memorable? Because people thought Guy was "off". Man, if my "off" was shooting 50% on airmails, I'd think I was pretty good.

The list of best airmailers in the country can't be complete without the player with arguably the most famous airmails on the biggest stage. Baldwin's airmails propelled him to victory at the 2018 ACL Championships. He had the infamous airmail drag in the semifinals to defeat Daymon Dennis, and then followed it up with 10 airmails in the finals (83%) to be crowned champion. He has the most effortless motion in all of cornhole, using less than a foot of backswing, yet is still able to dominate the competition. Tournament after tournament, Baldwin brings a quite intensity that usually leads to big wins and pockets full of cash at the end. He is truly a master of the cornhole bag...must be the shades.

I've seen Jimmy McGuffin hit 27 airmails in a row. I've seen him go 8 for 8 in 8 bag airmail box challenges 4 times in one day. I've seen him airmail with 10% of the hole open. I've seen him play in an actual tournament, not a side game, with hundreds of dollars on the line, by only throwing airmails. He finished top 5 in that tournament. McGuffin is a machine, there's really no other way to put it. His form is completely suited to the airmail. McGuffin is another guy that doesn't throw the prettiest bag, and his slide shot doesn't really travel that far. The normal slide shot he uses still only lands about 6 inches from the front of the hole. If the new school of cornhole is fighting for supremacy in the cornhole world with their big pushes, McGuffin may be single-handedly leading the old school tradition of the airmail.