The Chase is Over

We crossed the finish line for the 2018 ACL Nationals this weekend and I could not have been more thrilled with the ending. We saw new names, familiar faces, and top notch talent steal the show in the shadows of historic Lambeau Field. The Johnsonville Cornhole Championships: ACL Final Chase saw over 200 of the best Cornhole players in the country compete for over $15,000 in cash, and just like the legends of the monument next door, the players performed under pressure.

Coming into the weekend, everyone was certain that we would see the familiar faces that have dominated doubles play at the last two ACL Nationals (Brooks/Graham, Henderson/Hissner, Guy/Guy). We were convinced that the powerhouse teams, in perfect conditions, would just continue to do what they do. These teams had combined for all six of the top three National finishes in the previous two events. Arriving at the conclusion of the season all playing at the top of their games, these three were poised to make another clean sweep in Green Bay.

Well, someone didn’t tell the underdogs how the story was supposed to end.

See, the true spirit of the ACL, what genuinely makes it great, is that history does not matter. Timothy Pitcher and Ryan Smith did not care that they had never played together on the main stage. Steve Vanderver and Lester Price did not care that people doubted an old school team in a new school Cornhole setting. Daymon Dennis and Philip Haydon did not care that Matt and Bret Guy had not lost as a team since January. What they did care about? Winning. 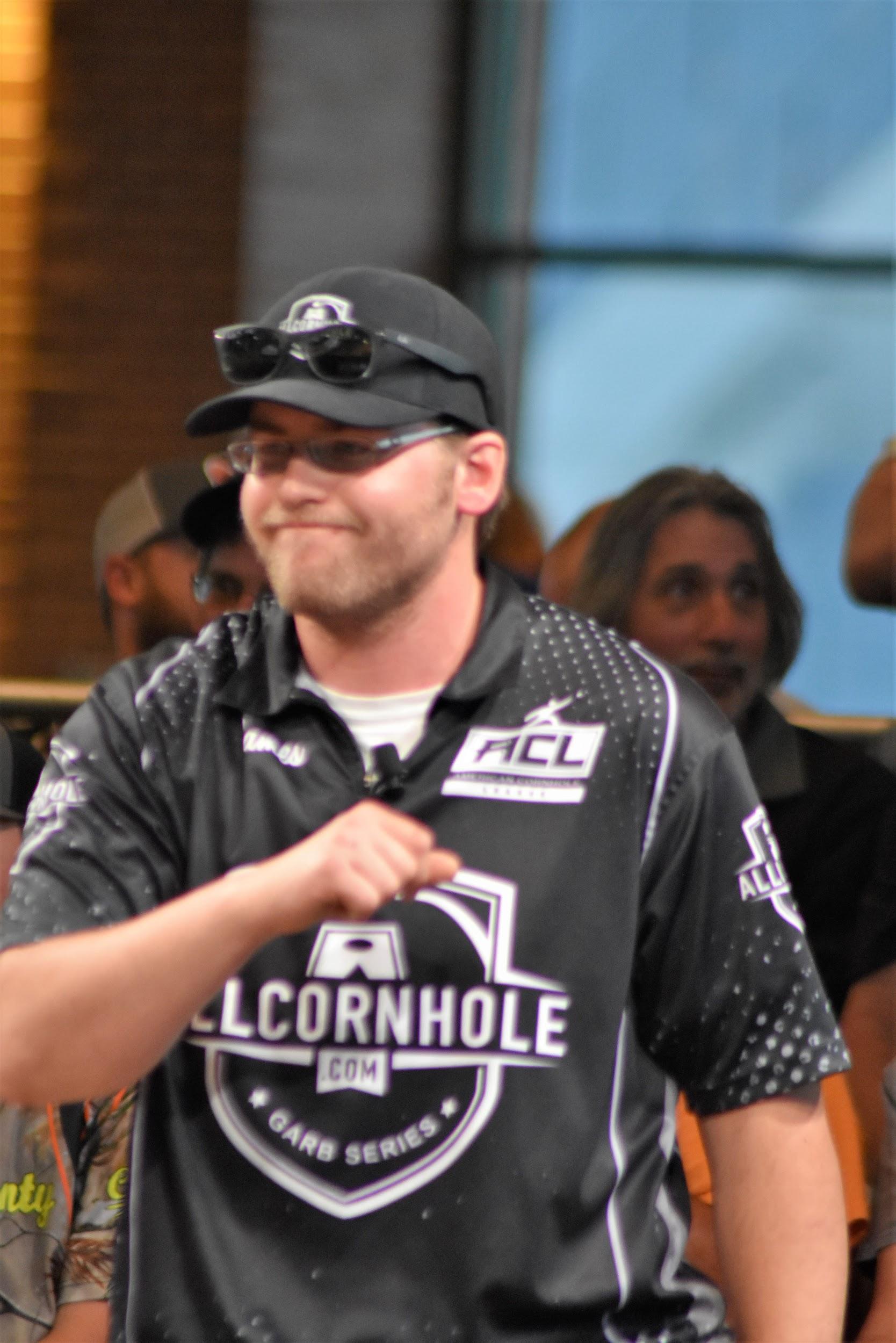 Not just one, but all of the Goliaths were beat in Green Bay and when the dust settled, we were left with just four: Frank Modlin/Jordan Langworthy, Daymon Dennis/Philip Haydon, Steve Vanderver/Lester Price, James Baldwin/Allan Rockwell. The semifinals and finals matches were all you ever wanted in an ending to a cornhole tournament. You had the unbelievably clutch airmail shot by Frank Modlin to keep the game tied at 18, the slick side battle between Philip Haydon and Allan Rockwell, and of course the incredible push by James Baldwin to seal the win.

Yes, it was James Baldwin and Allan Rockwell who reigned supreme. With Jordan Camba stealing most of their thunder all season, it was all smiles for Baldwin and Rockwell as they were finally able to “get the monkey of [their] backs” as Rockwell put it. Virginia steals yet another trophy for the case and shows just why the Atlantic Division may be the strongest in the country.

Day one was for the underdogs, but day two is for redemption. When singles began on Saturday morning, you could tell the favorites had the look. You know, that look when you get beat, and you tell yourself it’s never happening again. The big names were ready, focused, and down the middle. 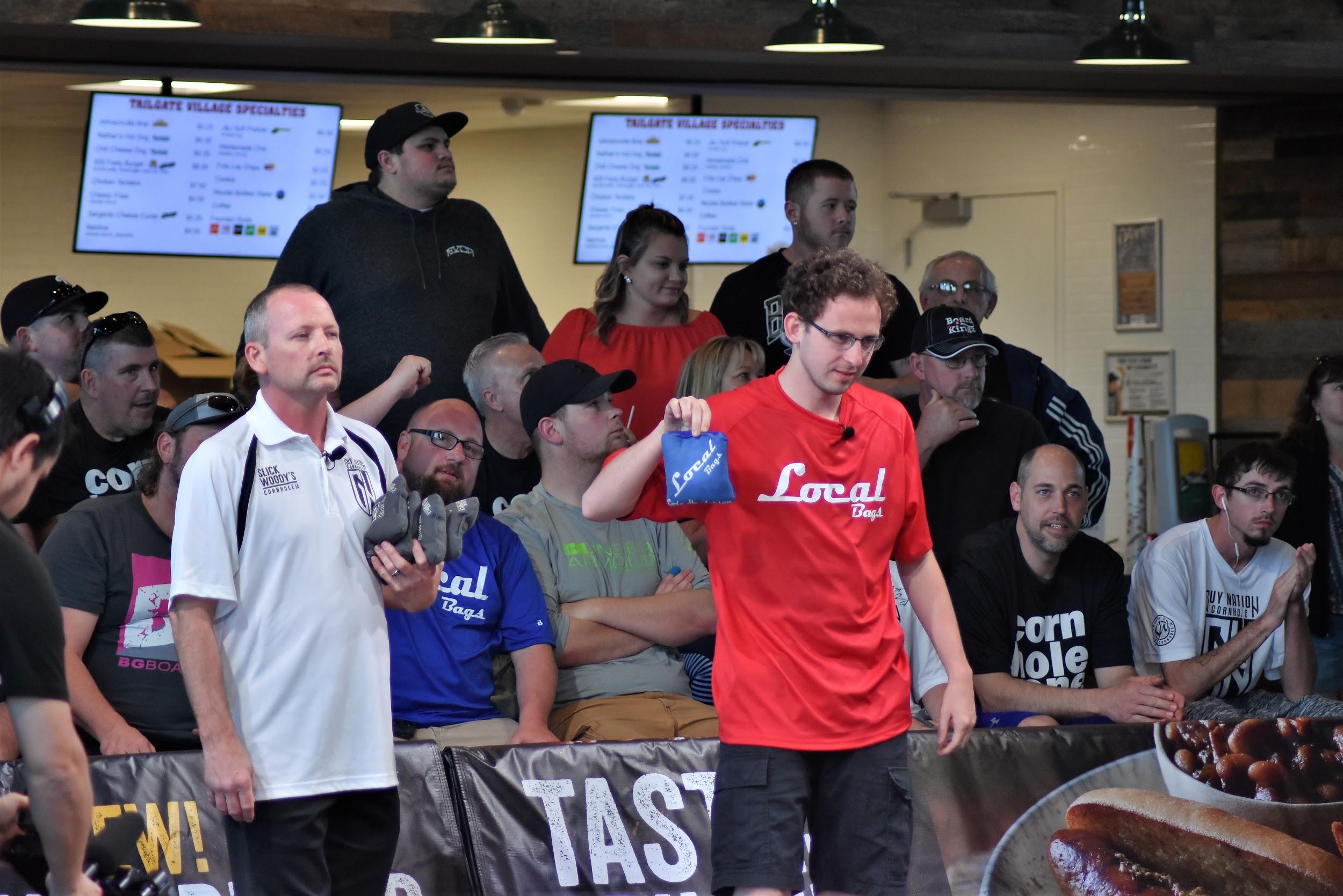 Two players on day two were heads above the rest of the competition. Cody Henderson came into the weekend throwing the best he ever has, in my opinion. When Henderson can get his push shot straight, he is one of the best in the country. Matt Guy was still riding the high of his win in Las Vegas. Not even a broken finger (which he suffered that morning after falling up the stairs) or a heartbreaking loss in doubles with his son, Bret, could stop Matt Guy from doing Matt Guy things.

Neither of the competitors all weekend let anyone get close. Matt’s closest game was to Kentucky rival Daymon Dennis which ended at 21-14. In the other bracket, Cody Henderson made quick work of Bret Guy (21-0) and finished his run with a 21-7 win over #2 ranked ACL player Jordan Camba. Both players were hot coming into the finals, but as my partner in the booth Ryan Alessio said, “trying to slow down Matt Guy is like trying to stop a flamethrower”.

He could not have been more right. In the finals, Cody threw an average of 2.74 bags in the hole, a number at this level could enough to beat 90% of all players in the competition in neutral conditions. The problem was, Matt’s 3.1 average just couldn’t be slowed. In the end, Matt Guy won again and is now just a second place finish in his last conference event away from claiming the 2017-2018 ACL Player of the Year title.

In addition to Singles and Doubles, we had plenty of other tournaments happening throughout the weekend. Christine Papcke won Women’s Singles....again! After losing her first game, she came back all the way through the second chance bracket to beat Courtney Coy twice and then Kamryn Belvin once in the finals to sweep all three ACL Nationals in the Women’s Singles Division. We also had the awesome ability to highlight our Competitive and Social divisions on ESPN3 with Tom Gorski winning Competitive Singles and Jose Rodriguez winning Social Singles. “Big Time Bob”, Bob Vonch, also took home Senior’s Singles and Trey Burchfield won Junior’s Singles.

The Johnsonville Cornhole Championships: ACL Final Chase surpassed any and all expectations. It had the setting, the energy, and the fun. Make sure you tune into any of the replays of the ACL Final Chase listed below. Next stop, Coney Island on July 4th!