The ACL Pro Invitational Presented by Johnsonville happens on July 4th at MCU Park on Coney Island. Sixteen of the best Cornhole players from across the United States will compete live on ESPN 2 at 1:00 PM for a share of $20,000. The players have been randomly divided into 8 teams. The teams will compete in a single elimination bracket with 10 round sudden death scoring. The unique format, location, and pairings, make this event wide open for anyone to win. The MCU Park doors open at 11:00 AM for food, drinks and some cornhole on the field. Entry to the event is FREE with a voucher and 1,000 fans will get Brooklyn Cyclone tickets to the game later that evening after the broadcast concludes. Let’s take a closer look at what each team has to do in order to be named ACL Pro Invitational Royalty.

Modlin and Anderson are a strong team in this field. Modlin, having multiple television appearances, has plenty of big game experience. His airmails are some of the best in the game. Anderson is a consistent, hard-throwing player. He has been consistent at his regionals but has struggled at times in nationals this season.

Key:Eric Anderson must play well under pressure. Because of Anderson’s style of play, he should have no issue throwing outdoors. I am confident that Modlin will play like typical Modlin and will carry the team at times if needed. However, with only 10 rounds per game, any big spots early in the game will surely put the team in a big hole. Anderson probably won’t have to do a ton of scoring, but he has to play well enough to keep the game close on his end. Every game they play should be close, as they have a tough road to victory, so clutch shots will be necessary. If Anderson can be clutch, I like these two as a top three team.

Gardner and Baldwin are an interesting pair just because of their differences in energy. As seen before, Baldwin will stay mellow throughout the game, and he uses focus as his strength to win games. Gardner, contrastly, often brings high energy and emotion to every game. Adrenaline is his key to success. With Baldwin being historically the much more successful player, he will more than likely be responsible for most of the scoring.

Key: David Gardner has to have his best tournament of the year. James Baldwin has had unbelievable recent success. His 1st place doubles finish and his 3rd place singles finish at the ACL Final Chase prove he is playing well and can handle the pressure. Gardner, on the other hand, has not played his best at the Nationals this season. Gardner and Baldwin have arguably the most difficult bracket out of any team. If the favorites win out, they would have to play Anderson/Modlin, then Camba/Ryder, and finally Hissner/Papcke. Those three teams are the three highest odds to win. Baldwin has proven he can win his end, now Gardner must win his.

David Gardner at the ACL Kickoff Battle in January

Although Hissner and Papcke are the popular pick, the team generating the second-most amount of hype is Camba and Ryder. Jordan, being the #3 ranked player in the country, has been perfect at the conference and regional level. His only blemish to his singles ranking came from a 2nd place finish at the ACL Kickoff Battle. Even so, Jordan showed there that the wind and weather have little effect on his abilities. Therefore, the determining factor for this team will be the performance of Ryder. Ryder’s best finish of the year came at the ACL Cornhole Mania. In games he won, he beat opponents easily and early. In games he lost, he gave up big points early, fought back, but came up short.

Key: Eric Ryder scores early in every game. As said, Ryder’s losses come when he struggles to put points on the board early in a game. If it takes him too long to find the center of the board, it will be tough for this team to win, especially when each game is limited to 10 rounds. Fortunately for both players, their throwing styles are suited for outdoor play. Combine wind and weather with some early scoring by Ryder, and these two could be Papcke and Hissner’s biggest challenge.

This pairing is another unique one. For the most part, Rockwell is a reserved player on the boards. Seto Soto? The farthest thing from reserved. Put some lights and a camera on Soto and get ready for a show. Now sometimes, that type of energy can hurt a partner who is generally reserved. However, Soto knows that him and Rockwell are coming into this tournament as underdogs with nothing to lose.

Key: Seto Soto wins the mental game. Soto has to find a way to stay focused, but also get in the heads of his opponents. Whether it be appropriate celebrations, milking the shot clock, or just trying to trash talk in between rounds, look for Soto to try and get his opponents out of sync. Rockwell, being a slick side player, is almost always down the center and we know he will put plenty of bags in the hole to win. It is for that reason the game will rest on Soto and whether he can slide ‘em straight with a chip on his shoulder.

Justus and Kelly are the biggest underdogs in the field. After randomly drawing teams for this Pro Invitational, this team remained the only one lacking a top 20 caliber player. It also doesn’t help that their first game is against top ranked ACL player, Cody Henderson. Justus is as true of a slick side player as they come. It is for this reason why bag selection is going to be interesting when it comes to this team. I expect them to use a very slick bag. Kelly must be able to use the sticky side effectively, because his natural throw will be too hard for the slick side they will be using.

Key: Wally Justus goes on a big run. I believe Justus and Kelly’s best chance to make it past the first round is for Justus to throw against Henderson and go on a big run. I’m talking 8-12 bags in a row in the hole. If that happens, the door is opened for Kelly to score against an inconsistent Pfaff. If Kelly can block the hole, and score 1-2 points every round, Kelly and Justus have a great shot to win a low scoring game. A shorter game always benefits the underdogs, and if these two can score early, they may just delay Henderson enough from being able to takeover the game. If they can make it past round one, their path doesn’t get any easier, but the strategy will remain the same. 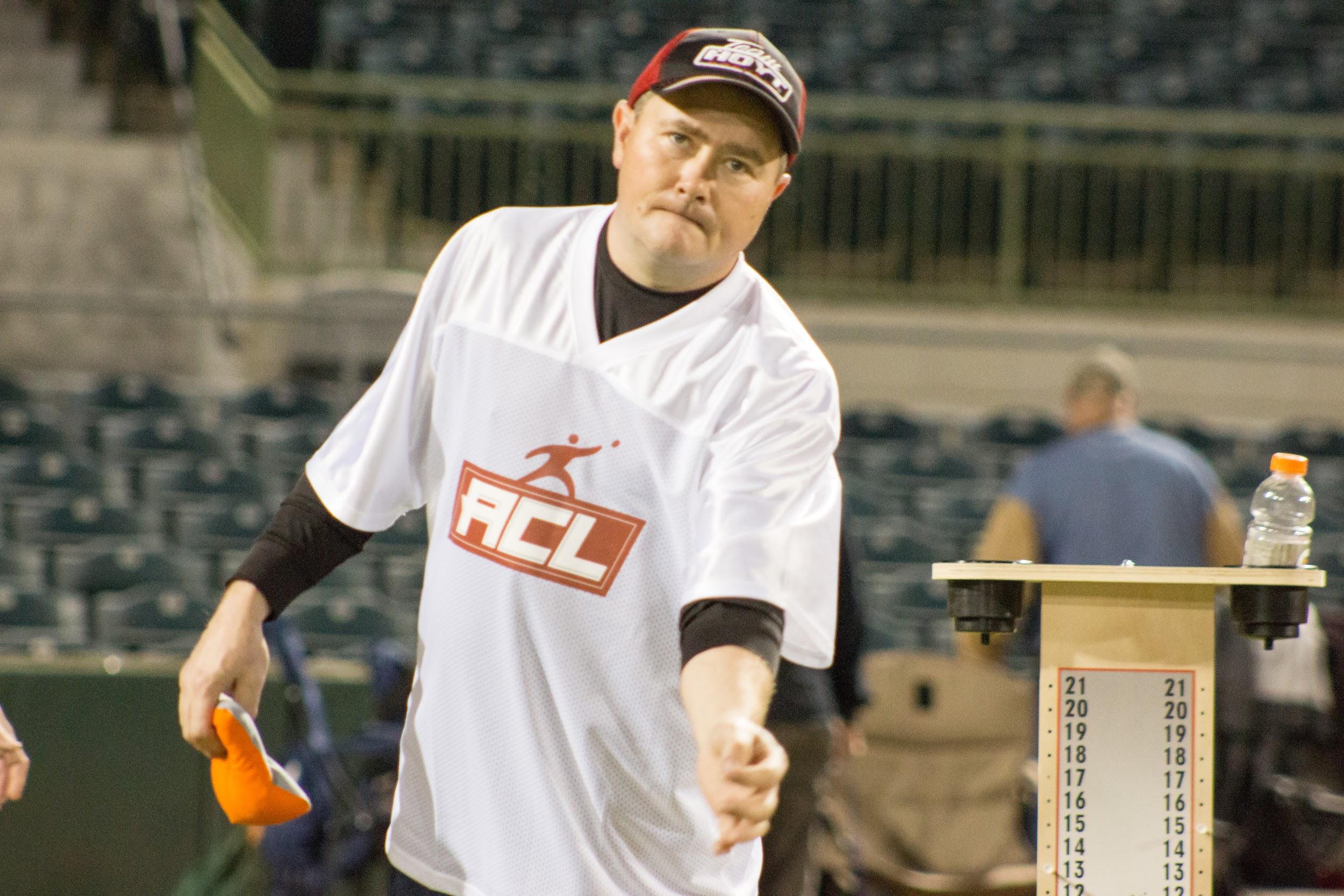 Wally Justus in the rain at the ACL Kickoff Battle

There’s not much that needs to be said about Cody Henderson as the #1 ranked ACL player. He has all the trophies, all of the accolades, everything. His partner, Mike Pfaff, however, does not. Yes, for the past few years, Mike Pfaff has been generally overshadowed by his girlfriend and undefeated women’s champion, Christine Papcke. Even though he will never get tired of seeing her name in the spotlight, you have to think that at some point Pfaff will be ready to make a name for himself on the big stage.

Key: Mike Pfaff blocks the hole every round. What’s the nicest thing about playing with the best player in the country? He rarely gives up many points. Mike Pfaff’s number one job in this tournament will be to sit in front of the hole and make a mess during each round. Force the opponents to airmail, push, go around bags, whatever. Make the opponents do something other than the traditional slide every single shot. Even if Pfaff concedes two points to a great airmail or push, he will live with that knowing he has a superstar on the other end.

This team by no means should be underestimated, but they are most certainly flying under the radar. Ken Schaef is not a well known name across the country, and Scott Lane is coming off of a brief break since ACL Cornhole Mania in March. The benefit for them? They’re still a great team. In addition, they have the heavy favorites in the first game. Cornhole players know this concept well, if you want to beat the best, you want to play them early in a tournament before they’ve established a rhythm.

Key: Will the real Scott Freakin’ Lane, please show up? In the past few years, if you traveled to a Cornhole tournament that was outside and you saw Scott Lane, your heart dropped. Lane has been one of the most dominant outdoor players in the history of Cornhole. The only problem is, Lane has had disappointing finishes at National tournaments this year. That is why my key for Lane and Schaef is asking which Scott Lane will be in Coney Island. Will it be the dominant outdoor player with a beautiful slide and effortless airmail? Or will it be the player who has struggled this season to make a high finish. Schaef will play well, let’s see if Lane can too. 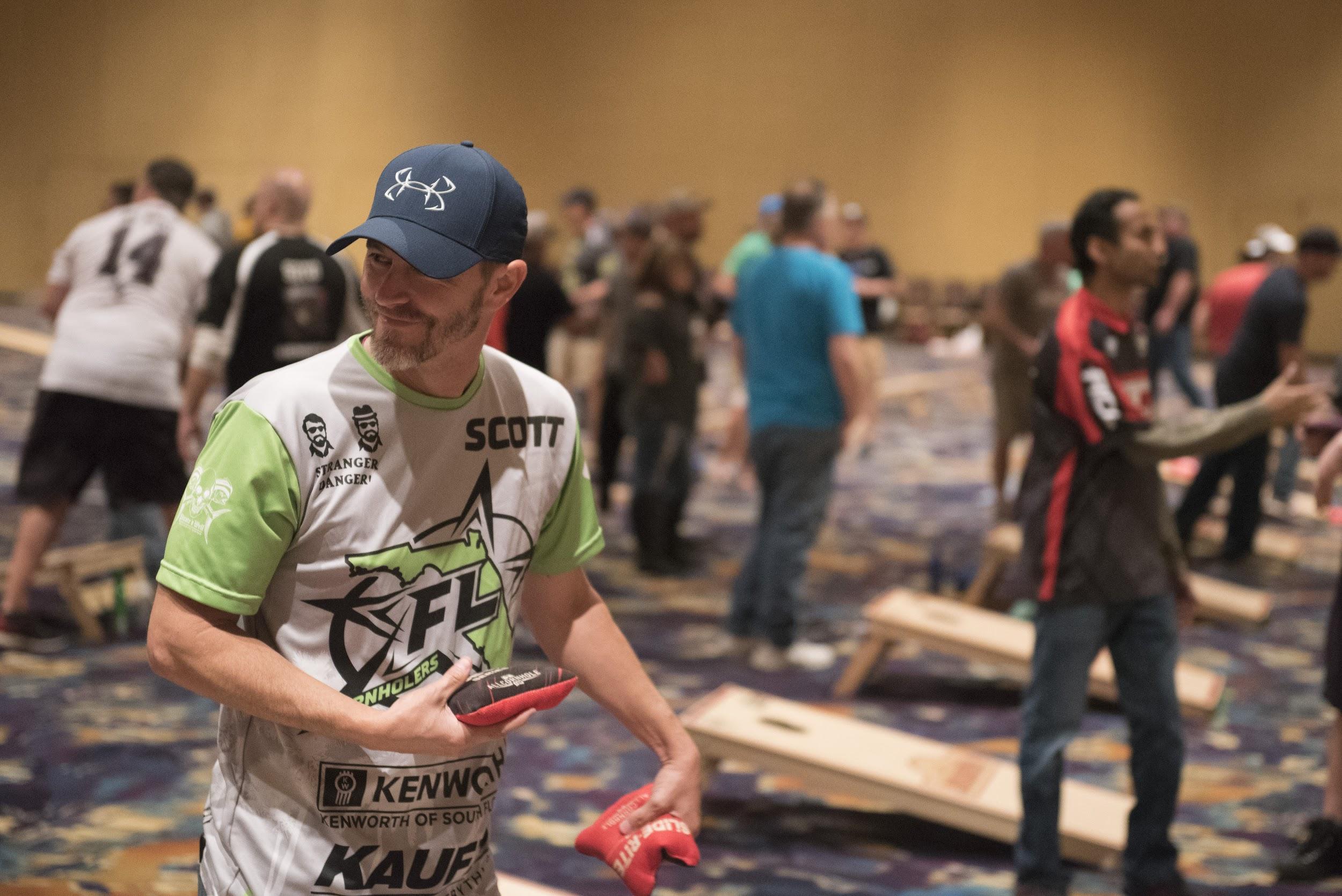 A smirk from Scott Lane at the ACL Cornhole Mania

There’s not much analysis for these two. On one end, you have the undefeated women’s champion of the ACL for the 2017-2018 season, not to mention a top 25 ACL Singles player. On the other end, you have a doubles champion and #3 Overall ACL player. They are the most decorated team by a long shot and are coming off high finishes at national and conference play. Christine Papcke and Adam Hissner will come to play, the question is if someone or something throws them off their game.

Key: Christine Papcke’s bag vs. the wind and weather. If both of these competitors are at the top of their game, it’s tough imagining that these two don’t walk away with the win. But even Hissner himself said “the tournament is outdoors and it can be anyone’s day”. That is the absolute truth. With such a finesse style, any wind at all will surely obstruct Papcke’s throw. Now, if she’s able to adjust and find a groove, game over. But maybe, just maybe, that wind blows a little harder and some raindrops hit the board. Then, it’s anyone’s game.